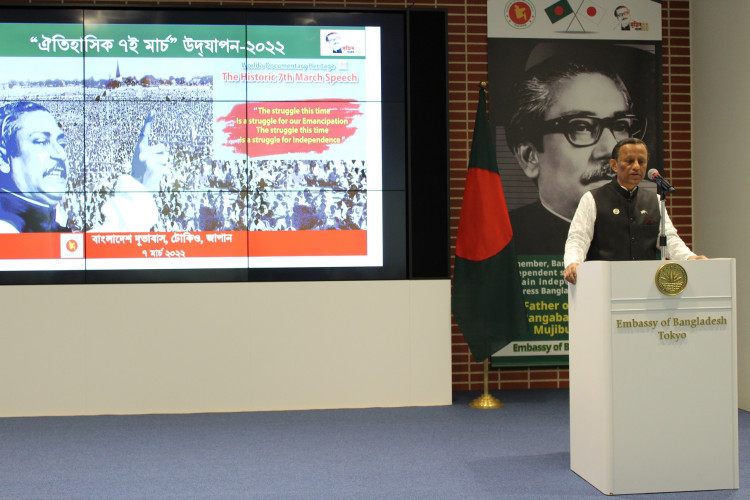 The Embassy of Bangladesh, Tokyo today (07-03-2022, Monday) observed the Historic 7th March with due respect and fervor by recalling the epoch-making speech of Father of the Nation Bangabandhu Sheikh Mujibur Rahman made on this very day in 1971. The day’s program was inaugurated by placing of floral wreath at the portrait of the Father of the Nation located at the embassy premises in the early morning.  In the second part of the event, H.E. The Ambassador hoisted the national flag along with the rendition of the national anthem. This was followed by observance of 01 (one) minute silence in remembrance of the Father of the Nation, his family members and to the memories of the martyrs who sacrificed their lives in the journey of independence.

Following the pandemic guidelines, the program resumed indoors with offering of special prayer (munajat) for the salvation of the souls of the Father of the Nation, his family members and all martyrs as well as for the peace and prosperity of the country under the leadership of Prime Minister Sheikh Hasina. The messages issued by the Hon’ble President and Hon’ble Prime Minister on “Historic 07 March Speech" were read out.

In his remarks, Ambassador Ahmed remembered with deep respect Father of the Nation Bangabandhu Sheikh Mujibur Rahman under whose charismatic leadership Bangladesh emerged as an independent sovereign country. The Ambassador said 7th March is a glorious and important day in the history of Bangladesh, when Father of the Nation, Bangabandhu Sheikh Mujibur Rahman made his clarion call for our independence and freedom in his thunderous voice, “The struggle this time is a struggle for our emancipation, the struggle this time is the struggle for Independence”. Following this call the whole country joined the liberation war and became victorious after nine-month. The Ambassador recalled how this historic speech was recognized by the UNESCO and enlisted as part of the world's heritage by including in the "Memory of the World Register” in 2017.

A discussion on the significance of the day was held following the address of the Ambassador where a significant number of Bangladesh community members took part in a lively discussion paying their deep tribute to the Father of the Nation Bangabandhu Sheikh Mujibur Rahman and his historic speech of 7th March and its significance. The speakers said Bangabandhu's lifelong dream was emancipation of his people and to turn the independent sovereign Bangladesh into a prosperous “Golden Bangla”. They expressed their strong commitment to work together to realize the dream of Bangabandhu and also to implement Prime Minister vision 2041 to turn Bangladesh into a developed country by contributing from their respective position.  At the end, a video documentary was screened on historic 7th March speech.