The Embassy of Bangladesh, Tokyo celebrated the Shaheed Dibash and International Mother Language Day with due respect solemnity and enthusiasm on Monday 21st February 2022. In the morning, floral wreath was laid at the altar of temporary Shaheed Minar located at the Embassy premises by H.E. Ambassador and all the Embassy officials. H.E. the Ambassador hoisted the national flag at half-mastalong with rendition of national anthem in presence of Embassy officials. This was followed by observance of 01 (one) minute silence in memory of the Language Martyrs, who sacrificed their life to establish the right of mother tongue in 1952.

Later an online event was held due to the ongoing COVID-19 countermeasures in Tokyo. Special prayer was offered for the salvation of the souls of the Language Martyrs and Martyrs of Liberation War. Prayer was also offered for the Father of the Nation Bangabandhu Sheikh Mujibur Rahman, his family members, for the wellbeing of the expatriate Bangladesh Community and for the peace and prosperity of the country. The messages issued by the Hon’ble President, Hon’ble Prime Minister, Hon’ble Foreign Minister and Hon’ble State Minister for Foreign Affairs on the occasion of “Shaheed Dibosh"and the “International Mother Language Day” were read out by Embassy officials.

A discussion on the significance of the day was held following the address of H.E. the Ambassador. In this phase, a significant number of Bangladesh community members as well as Japanese speakers took part in a lively discussion. The speakers paid their tribute to the Father of the Nation Bangabandhu Sheikh Mujibur Rahman and the Language Movement Martyrs, the greatest sons of the soil for their contribution in achieving our right to speak mother tongue. Ambassador Masato Watanabe, President, Japan-Bangladesh Society,Ambassador Matsushiro Horiguchi, Former President of JBS, Mr. Masaaki Ohashi, Professor, Sacred Heart University & Vice President of Japan-Bangladesh Society and Professor Kyoko Niwa, Bengali Department, Tokyo University of Foreign Studies.They praised Bangladesh for not only upholding Bangla as well as other language.

A short documentary outlining the history and significance of the day and cultural aspect of Bangladesh titled “Bangla” was screened. The program concluded by thanking everyone for their spontaneous participation and cooperation for duly observing the day, despite their busy schedule.  As the event was held online, a significant number of Bangladesh community members from various prefectures of Japan as well as Japanese nationals were able to join the program. 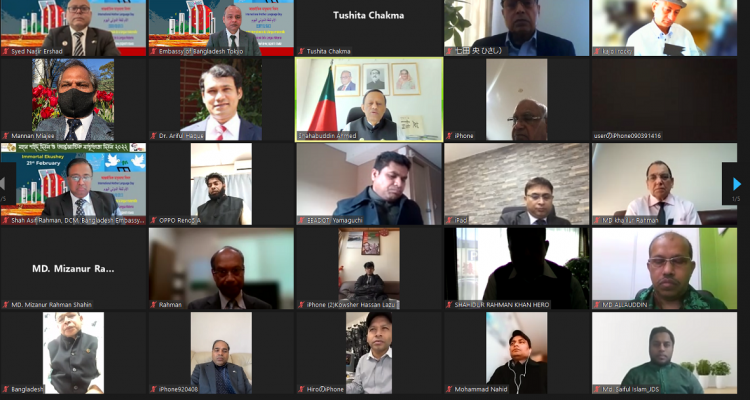